What is a non-surgical rhinoplasty with nose filler?

Traditionally, nose reshaping has been done with surgically with rhinoplasty. It remains the gold standard for nose reshaping, but for those who do not want a permanent change, or for those who would like to try a temporary procedure prior to rhinoplasty, injectable nose enhancement with dermal fillers may be appropriate.

Nasal tip elevation is often desired by patients. This can be achieved by injecting the tip of the nose, as well as the by injecting filler in the base of the collumellar (the underside of the nose separating the nostrils) to lower it, which makes the tip appear elevated.

Another use of dermal fillers in the nose is to raise the height of the nose in those with less prominent nasal bridges or flatter noses generally. This treatment is popular in the asian population who tend to have less prominent noses and desire a higher nose bridge.

What are the risks of non-surgical rhinoplasty?

One of the rare, but important risks to consider when having non-surgical rhinoplasty is the risk of compromising the blood supply. It is possible for filler to be injected directly into the arteries that supply the nose, which causes an immediately blanching of the skin and can lead to the death of the skin and scarring. Another possibility is when the filler causes compression of the local blood supply (the space in the nose becomes too tight), which can also lead to similar problems. There is also a risk of one-sided blindness from filler to the nose. One of the arteries supplying the nose is the dorsal nasal artery, which has direct connections with the ophthalmic artery that supplies the retina. Direct injection into this artery with enough volume and pressure can cause blindness by obstructing blood flow in the ophthalmic artery and its branches. To date, there has been one case of blindness from filler in Australia, and approximately 100 cases world-wide (from filler injections in general, and not just nose fillers)

The risks increase significantly if one has had surgery on the nose in the past. All surgery tends to cause a degree of scarring. This scarring fixates blood vessels making them more likely to be entered with a needle or cannula. The presence of scarring also decreases the space within the nose for filler injection making it easier to obstruct blood flow to the nose through vascular compression from fillers.

To avoid the above risk, we mostly use blunt cannulae rather than needles, as cannulae are less likely to directly enter the blood vessels than a sharp needle. Our practitioners are also conservative in their approach, limiting the amount of volume of filler they will inject in one session as well as the speed in which the filler is injected. These factors help to reduce the potentially disastrous, although rare, risk of blindness from nose fillers.

What are the types of dermal fillers that can be used in the nose?

Hyaluronic acid fillers, which are the most common type of dermal fillers used in general, are the most common fillers used in the nose. They are temporary, but can last a number of years. They are also reversible with an injection of the enzyme hyaluronidase, which dissolves hyaluronic acid fillers. This might be utilised should there be a concern with the aesthetic look of the filler or in emergency situations where filler has been inadvertently injected into an artery (see risks above). Many patients do find the effect of nose filler to dissipate before 1 year. Through studies using MRI scans, we believe that this is not due to loss or metabolism of filler, but instead due to filler migration. In the case of the nose, this could be due to migration away from the bridge of the nose. For this reason and others we generally do not recommend nose fillers to be repeated too frequently, and if a long term solution is required, then surgery should be considered.

Permanent fillers can also be used in the nose. The advantage of using permanent fillers in the nose is that the treatment is once-off, and the repeated risk of injections is avoided. The disadvantage is that should placement be sub-optimal, it cannot easily be corrected. Furthermore, permanent fillers do have a greater risk of problems such as granuloma (reactions with the body) causing lumps or hardness of the filler.

This person presented to the Victorian Cosmetic Institute concerned about a bump on the bridge of her nose. She had dermal filler injected into the area above and below the bump to create a much straighter appearance in profile view.

This patient presented to the Victorian Cosmetic Institute with concerns with her nose that were affecting her emotionally. She would hide away and feel embarrassed when people looked at her. She had a small amount of dermal filler in the bridge and tip of her nose to refine its shape and create a smaller, straighter appearance. The patient now feels confident and empowered with her appearance, especially in profile. 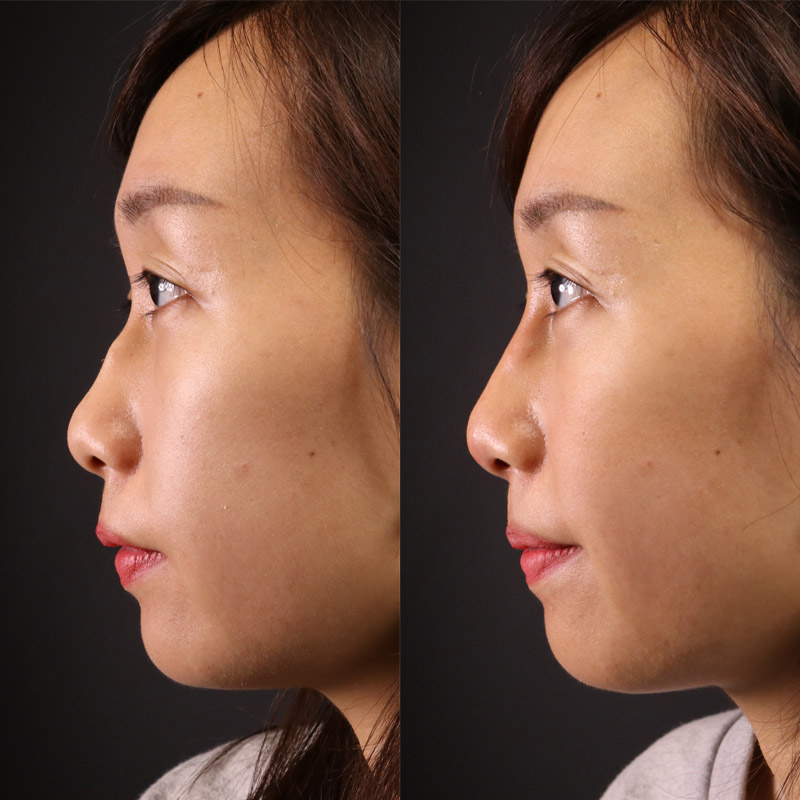 This patient had 1mL of filler injected into the areas above and below the bump in her nose using a cannula. The improvement in the profile view is evident.

Case study 4: reducing the appearance of a dorsal hump with nose filler

This patient was concerned with a dorsal hump and didn’t want to undergo surgery at this time for various reasons. 1mL of filler was used above and below the dorsal hump to make the overall appearance of the nose straighter

This patient presented with concerns about the tip of her nose as well as the bridge. Nose filler was used to create the appearance of tip elevation and a straighter bridge.

Why should I choose Victorian Cosmetic Institute as my provider of Non-Surgical Rhinoplasty?

At Victorian Cosmetic Institute, our doctors have a large range of dermal fillers for you to choose from to suit your needs and goals. Furthermore, we specialise in non-surgical nose reshaping and non-surgical facial shaping.

Making that first phone call can be a confronting task – many of our patients have preferred filling out our online enquiry form.
We can then contact you with an understanding of the results you are hopeful of achieving and ensure the treatment is appropriate.

It’s as easy as clicking either of the buttons below and completing the provided form.

For estimate mls and costs visit the Cosmetic consultation and treatments pricing page.