Freckle removal with the Fraxel (1927nm) laser,  Gemini (532nm) laser, Ruby (694nm) laser, and PiQo4 laser (532nm) can be effective in the hands of experienced practitioners. Selection of laser and laser settings may depend on the patient’s skin type and needs. IPL or intense pulsed light is another machine that can help remove freckles. However, as it is a broadband light source, it is less specific and effective for treating freckles in comparison to a specific laser such as the lasers listed previously.

Freckles are multiple, flat, spots on the skin due to uneven distribution of melanin (skin pigment) in those areas. They are usually about the size of a matchstick head and are reasonably uniform in colour. They are usually situated on sun-exposed areas of the skin, including the face, neck, arms, and shoulders and usually darken after sun exposure. Usually, freckles start to occur at a very young age.  Freckles most commonly occur in people with lighter or fairer skin types, and in those who have a genetic predisposition to developing freckles.

There are 4 lasers available (Fraxel, PiQo4, Ruby, and Gemini lasers) for the treatment of freckles at the Victorian Cosmetic Institute. The laser used will depend on the type of freckles, the skin type, and the presence of other skin concerns. Lightening creams (such as Kligman’s formula) can be used in the treatment of freckles, but usually only fade the freckles rather than removing them completely.  Lasers are able to remove the freckles completely usually after one to two sessions.

One of the lasers that are used for the treatment of freckles is the Q-switched ruby laser. The ruby laser has a wavelength, 694nm, that is highly attracted to melanin. Freckles, which are higher in melanin than normal skin, tend to attract the energy from this laser wavelength. The laser energy that is absorbed by the freckles leads to the destruction of the melanin in the freckle and its removal. Furthermore, the q-switched ruby laser has extremely short pulses of laser energy, each pulse lasting only a few nanoseconds (billionths of a second). The production of high energy levels in this short period of time also has a photo-acoustic effect on the melanin in the freckles, literally shattering the pigment particles.

The Gemini laser is also useful in the treatment of freckles/sunspots on Asian, olive or darker skin types. This laser is fired through a glass window that is chilled, and this cooling helps to prevent heat from damaging the skin. As Asian, olive, and darker skins tend to have more complications from lasers, this cooling does significantly help offset the risks associated with laser treatment in this population. The laser uses longer pulses in the millisecond range (thousandths of a second), and in clinical trials, it has been shown that this laser has less risk of post-inflammatory hyperpigmentation than q-switched lasers with the same wavelength on Asian skins. This is the eruption of pigmentation post-laser treatment or trauma to the skin.

More recently, picosecond lasers have been introduced, and these lasers reduce the length of the pulses to picoseconds or trillionths of a second. These lasers have the potential to further enhance the removal of pigmentation by reducing the amount of heat energy applied to the skin, whilst also causing a photo-acoustic or mechanical destruction of the pigmentation. The PiQO4 laser is an example of a picosecond laser. The advantage of shorter pulses is less bulk heating of the skin during laser treatment, and therefore a gentler treatment with potentially less downtime.

Fraxel laser (1927nm wavelength) is an effective laser treatment for freckle removal. Unlike other lasers mentioned previously, it is attracted to water in the skin, and not melanin. The mode of action is to simply exfoliate the surface layers of the skin off, including the freckles. As the name of the laser suggests, it is a fractional laser. This means that the laser fires very fine columns of laser energy into the skin, sparing the skin in between the columns. Counterintuitively, it does treat freckles very effectively, despite not covering the whole skin. The laser uses a scanning handpiece to deliver columns of laser energy, and this provides a very uniform treatment of the skin. The Fraxel 1927nm laser is one of our preferred methods of full-face freckle removal on fair skin types. 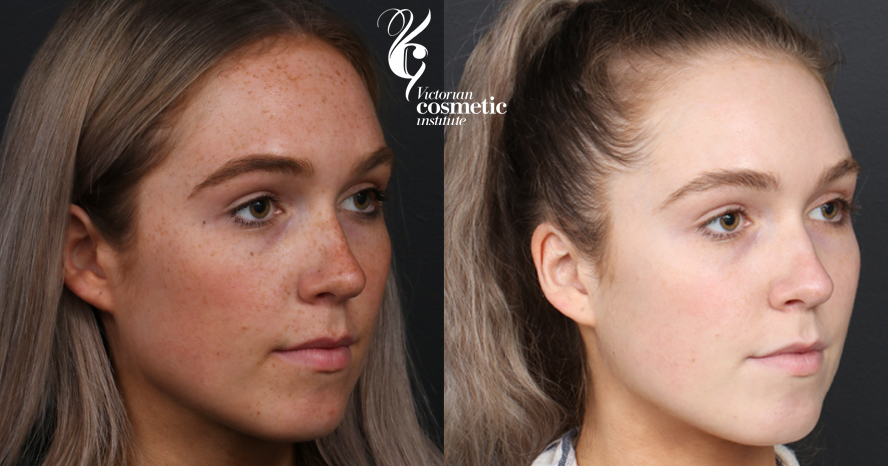 This is a before and after picture of a person who has had a single ruby laser treatment for freckles. One week of recovery was required for this treatment. No make-up/foundation is worn in either photos.

This female presents to Victorian Cosmetic Institute with freckles around her cheeks, forehead, and eyes. She has had several treatments with IPL at another clinic with some result (as seen in the before photo). The after photo shows her face after 2 treatments with the Medlite laser. The recovery for each treatment took approximately one week (for most of the scabs and swelling to subside).

This 37 year asian female presented with concerns about her sunspots/freckles. She had one treatment with the Gemini’s 532nm wavelength. Recovery time was 7 days where the pigmentation became darker, scabbed and fell off. Note that the moles were not treated and cannot be treated by the Gemini laser.

This female present to Victorian Cosmetic Institute for freckle removal treatment. She had her  full face treated with the Ruby laser. The patient is very happy with her results and maintains her skin using a 50+ sunscreen daily. This patient presented to Victorian Cosmetic Institute with pigmentation concerns, in particular the larger spot above her eye brow. This is her before and after from 1 session with the Fraxel laser with the 1927nm wavelength. Recovery time was approximately 7 days. What is involved in having laser treatment for freckles?

Usually, treatment involves firstly anaesthetising the area to be treated with numbing cream. This helps to reduce the discomfort from the treatment. The appropriate laser is selected, and then systematically applied to the area to be treated. A snapping sensation is felt, as well as some heat. Immediately after the treatment, the freckles appear darker than normal, and the surrounding skin appears red and swollen. Ice packs or an air cooler are usually applied to the skin post-treatment to help reduce the amount of heat, swelling and redness.

After freckle laser treatment, freckles darken until after approximately one week where they will scab and peel off. One week of recovery or downtime due to swelling, redness, and darkening of freckles is usually required.

Treatments are usually spaced at least one month apart, and normally one to two sessions are required, although more are required in some cases.

It is possible for freckles to return with sun exposure, so it is extremely important to wear sunscreen daily, both before and after treatment.

What is the price of freckle laser treatments?

The cost of laser treatment for freckles is listed on our pricing page.

Why choose Victorian Cosmetic Institute as you provider of laser treatments for freckle removal?

With years of training and experience, our doctors specialise in laser treatments and we have a number of lasers available to treat skin conditions and freckles. We are therefore able to provide you with optimal treatment for your skin, with fewer risks and complications.

The first step is simply contacting us for your initial freckle laser consultation, where we will discuss with you what is a realistic and achievable outcome, and what to expect from your treatment.

Speak with one of our professionals about Freckle Laser Treatment

I use skin lightening cream for my sun damaged skin

How freckle removal treatments can enhance your natural appearance