Am I a suitable candidate for fat dissolving injections for my double chin?

A double chin can be a significant concern to those afflicted with this problem.  We often see this concern in those who are of normal weight. Furthermore, it may not always improve significantly with weight loss alone. Fat in this region tends to blunt the jawline and cause a lack of definition between the face and the neck. Removal of this fat has an anti-ageing effect through improved framing of the face.

Traditionally, the treatment for a double chin is liposuction. However, many are averse to having surgery and would prefer a simpler, less invasive method of fat removal. Fat-dissolving injections are a viable alternative for those who want to avoid surgery and the risks associated with having surgery or an anaesthetic.

The fat dissolving injections are therefore best suited to those who want to remove smaller pockets of fat and have good quality skin without significant laxity.

Submental fat - what is it?

Submental fat, colloquially known as a ‘double chin’, is the fat that lies under the jawline and chin. It is often an area of concern for those with an excess amount of fat in this area. Weight loss, although helpful in many cases, may not reduce fat in this area to a significant degree as often fat deposition in this area is genetically determined. This is often seen in cases where submental fat is present despite an acceptable body weight.

Fat in this area can contribute to an ill-defined jawline and a blunted angle between the jawline and the neck rather than a more favourable angle of 90 to 100 degrees. 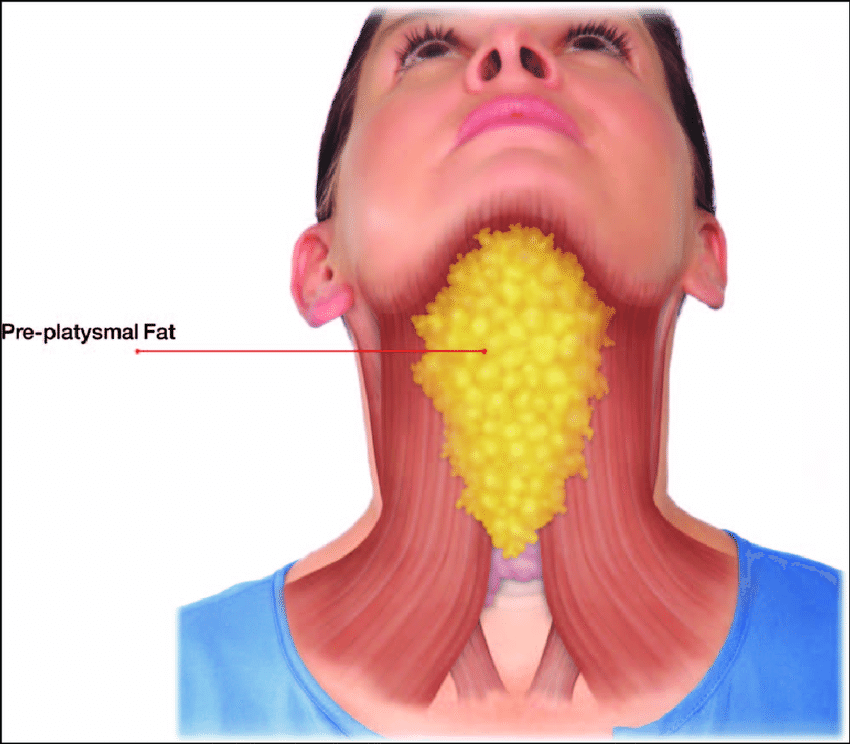 After three treatments of fat dissolving injections this patient’s submental fat measurement reduced by more than half from 3cm to 1.2cm. After years of wearing her hair down she is now confident to wear her hair up. Liposuction has traditionally been the treatment for removing fat accumulation in genetically predisposed areas. It is mostly done under general anaesthetic or intravenous sedation. Small incisions are made in the skin (usually just under the chin, and behind the ears) to allow the administration of local anaesthetic as well as the removal of fat by a metal cannula with suction. Recovery is typically about a week. Despite the advent of non-surgical methods for fat removal, liposuction still remains the gold standard treatment. The fat is more definitely removed rather than relying on the slower process of fat cell destruction with injections. It is also possible with liposuction to measure the exact amount of fat removed. Also, during the procedure, the thickness of the skin and fat can be assessed to see if enough has been removed. With fat-dissolving injections, it is not possible to predetermine the amount of fat that will be removed in each case.

Fat-dissolving injections do however provide a non-surgical alternative to liposuction of the neck. They provide a less invasive method of fat removal with no incisions or scars. It can be performed in the office setting without a general anaesthetic and may be preferred for this reason. The exact names of the brands of these fat dissolving injections cannot be mentioned due to TGA regulations. They induce adipocytolysis or destruction of the fat cells. The results from these injections are permanent, as fat cells once destructed cannot regenerate.

Over a decade ago, the first type of fat-dissolving injection was released. They quickly gained popularity as the notion of being able to shape the body without liposuction was appealing for many. The injections were made from a combination of phosphatidylcholine and deoxycholic acid. These substances induce lysis or destruction of fat cells when injected into areas of fat. It was and is used as a treatment for removing fat on any part of the body and not just submental fat. The effect on body fat was, in our opinion, not particularly dramatic. The treatments were particularly painful when used on larger body areas, had fairly long recovery times (similar to liposuction!), and caused a significant amount of swelling and often hard lumps (that stayed for several weeks).

Submental fat treatment with fat dissolving injections tends to be more effective than body treatments due to the smaller amount of fat in the neck. Less product needs to be injected also which reduces the amount of pain and swelling with the treatment in comparison to the body treatments.

At Victorian Cosmetic Institute, we only use the combined phosphatidylcholine with deoxycholic acid fat dissolving injections rather than the newer Allergan product which contains just deoxycholic acid. We have found it to be equally effective and is significantly less painful. Furthermore, Allergan’s deoxycholic acid product is significantly more expensive, and the price of a few treatments can closely approach the cost of having liposuction to the area.

What should I expect after fat-dissolving injections treatment?

This will depend on the size of the treatment performed. In most cases, there is a significant degree of swelling that lasts from a few days to a few weeks. Swelling will be primarily determined by the amount of product injected. Tenderness of the area treated is also present for that time. In some cases, hard lumps form, and these can take some time to reduce in size. Bruising is also a common side-effect and can last up to 2 weeks.

Although the protocol for pain management outlined by Allergan only involves cooling the area before and after the injections, most patients do experience a significant amount of pain if only this method is used. The discomfort from the treatment is due to both the injection process as well as a stinging or burning sensation that lasts approximately 10 minutes after the treatment.

At Victorian Cosmetic Institute, we utilise both topical and injectable local anaesthetic injections prior to the administration of the fat dissolving injections which significantly reduces pain during and after the treatment.

What is the price of chin fat dissolving injections?

The treatment is $500 (inclusive of GST) per session, irrespective of the size of the submental fat deposit. Most patients will require 2 to 3 sessions.

Why choose Victorian Cosmetic Institute as your provider of fat dissolving injections?

Speak with one of our professionals about Double chin injections

Other Concerns: For Men